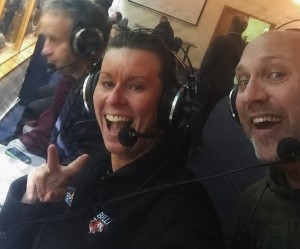 City Park Radio has received the results of the recent survey and it shows we are meeting the needs and expectations of our listeners across our broad range of programs.

At various times, the station tries to appeal to many sections of the community and a huge majority of respondents  agree. While one or two said they wanted less Country Music, Rock Music, spoken word or Sport, it was very pleasing to see the support for all of these programs.

City Park Radio is community radio endeavouring to include the whole community. A new program starts in July for the Afghan community in Launceston.

The station will have another survey in a few months when the translator has been on air for a time. Tell your friends about our extra frequency—96.5FM…loud and clear in the Tamar Valley.

Photo: Janie Finlay & Scott Brown have fun while David Mohr keeps his eye on a recent SEABL game… capturing the true essence of putting the community into community radio.

GOOD NEWS – City Park Radio is now broadcasting on 96.5 FM to the Tamar Valley… tell your friends that they may be able to get better reception on this frequency particularly in the West Tamar area.

A motion was passed in the Senate supporting community radio’s important role in providing a platform for diverse voices in an increasingly consolidated media landscape.

Senators Hinch, Lambie, Ludlam and Xenophon moved that the Government should increase funding for community digital radio to $4.5m per annum in 2018/19 and commit to funding at that level on an ongoing basis. 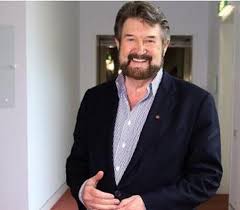 “I am thrilled that the Senate backed my motion to not only increase funds to vital community radio in 2018-19 but to ensure that the funding is ongoing. That means community radio won’t have to go cap-in-hand every year like Oliver for his bowl of gruel in Oliver Twist.

I had a successful career in commercial radio for a long time but I also know the value TO the community OF community radio. You provide information, entertainment, cultural awareness and education, to more than five million diverse Australians a week. You reach Indigenous Australians, the LGBTI community, migrants, refugees, the elderly. And you give a chance for local musicians to get their material out there in a forum not provided by the commercials. Not to mention giving a start to people like my younger doppelganger Paul Murray!”

Following the Senate motion passing, Senator Lambie reiterated the important role of community radio in giving a voice to those not represented in other media:

“Community radio programs are made by locals, for locals. They’re a chance to speak about some of the interests and concerns that don’t normally get much time in other broadcasting. And they’re produced by people who care enough about their community to give back by volunteering. This motion is an important step in securing the funding we need to secure a strong, healthy future for community radio.”

This funding would provide community radio with greater certainty and stability as DAB+ continues to grow in Sydney, Melbourne, Adelaide, Perth and Brisbane, and expands to Canberra, Darwin, Hobart and beyond.

Please help us show the Senators our gratitude by tweeting them a message like this one using the #keepcommunityradio hashtag:

LET’S HAVE A CHAT – VONDA BASSETT 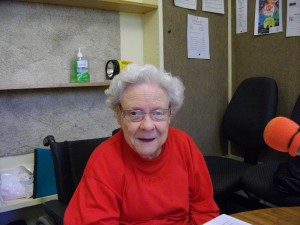 Tell us a little about yourself. My schooling was at St. Giles.I had some work experience at the LGH for 3 weeks, but stayed there for 4 years. Worked in the office of Cosgrove Park for 32 years before retiring.

Why City Park Radio? I was introduced to David Sice who came to my home to interview me.  He asked if I would be interested in working at City Park Radio, on a voluntary basis.  I started in the office – typing & Newsletters.  Over a period of time, my other duties have been Membership Secretary, Country Music Coordinator and unofficial fund raiser.  I now present an Afternoon Music program every two weeks.

How long have you been at City Park Radio and what was the first program you presented?  30 years. My first program was a country program in 1988.

During your time at the station, were there any funny moments you can recall?  I was unpacking a tea chest for fundraising one day and ended up head first in the tea chest.  Nobody was willing to help me out as they were laughing too much. Another time when the studio was upstairs, I threw my crutches down the stairs and frightened those that were in a meeting. They thought I had fallen down the stairs.

Do you have any other interests? Reading and Sport

Is there anything you still want to do in your life? I would like to attend a Jane McGrath Pink Day for Cancer cricket match in Sydney.

Show your appreciation for all the volunteer efforts at City Park    Radio. Remain a member of the premier community station in Launceston.

At $45, it’s the best value for money anywhere, and it also allows you to participate as well

A reminder for presenters you must remain financial to continue presenting on the station.

Once again City park Radio is happy to support this worthwhile cause in our community.

City Park Radio is a drop off point for non-perishable food to aid the Launceston Benevolent Society.

We CAN be a generous helper to assist others in need. 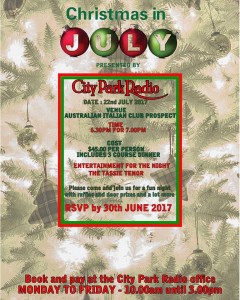 Make sure you have paid to reserve you spot at a table.

Get your tickets now at the CPR office—when the tix are gone, you’ll be out in the cold. 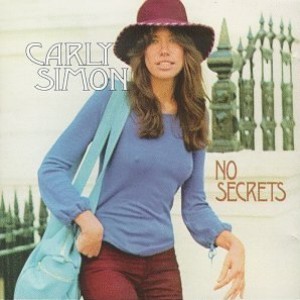 Carly Simon’s commercial breakthrough came with the release of her third solo album, No Secrets in 1972. The album topped the charts around the world, went gold, and contained her most famous composition, You’re So Vain.

That song set the album’s tone of saucy relationships – people still love to guess about the identity of the You’re So Vain’s chauvinist playboy! The follow up single The Right Thing To Do was a celebration of her relationship with James Taylor – and Taylor’s own Night Owl is a stand out track on the album. Many of the other songs deal with the intricacies of human relationships.

Richard Perry’s production on No Secrets is sympathetic to the nature of the songs and adds to their impact.  Carly Simon is also assisted by some fine vocalists and singers – Mick Jagger on You’re So Vain, plus Nicky Hopkins, Klaus Voorman, Bonnie Bramlett, Doris Troy and Paul & Linda McCartney contribute their unique touches.

Carly’s own vocal performance is outstanding and she conveys perfectly the spirit of each of the songs. No Secrets is Carly Simon’s landmark album and still retains its freshness and vitality some 45 years later.

Make a note in the diary

Time to decide you are going to become involved with the management of the station.

Positions available for nominations from financial members of the station.

Nomination forms available from the office.

If you have any leads for sponsorship , please pass them onto Shirley and success may come you way too. Discuss your suggestion with Shirley  6334 7429

Try one of our delightful snags in a blanket on a bed of sauteed onion… made all the more delicious with a squirt of mustard and tomato sauce.

It may be winter but we guarantee our sausages will be hot! hot! hot! … especially with mustard sauce.