A big thank you to everyone who took the time to complete the online survey for City Park Radio. The deadline was extended to the 5th of May and the results will be known in early June. This survey is more qualitative than many other surveys and it will be interesting to see if City Park Radio is meeting its Promise of Performance.

At the same time, Xtra Insights conducted a radio survey for commercial radio in the Launceston area with the results excluding community radio.

It revealed Chilli FM has breathed some fire into the radio market.

At a glance, commercial radio has spiced up the market with Chilli FM while the ABC, with the exception of Triple J, has seen some of the radio audience look elsewhere for a little more bite in their radio.

Show your appreciation for all the volunteer efforts at City Park Radio. Remain a member of the premier community station in Launceston.

At $45, it’s the best value for money anywhere, and it also allows you to participate as well.

A reminder to our presenters – you must remain financial to continue broadcasting.

LET’S HAVE A CHAT – TONY DAY 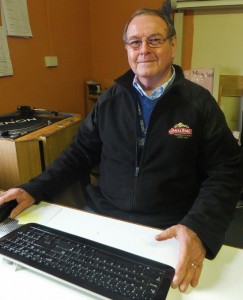 Where were you born?  Bulawayo – Zimbabwe

What is the highlight of your life?  Meeting my wife (Terri).  It was love at first sight. Three days later I proposed, and after a lot of persistence, she agreed to marry me one year later. We have two children and this year celebrate 53 years of a  beautiful life together.

Tell us about your life.  Worked in engineering in Zimbabwe, left that position to become a Service Manager in heavy earth moving equipment, which led me to the position of State Manager in Botswana for a short time. For four years I was in the Anti Terrorist Unit – Zimbabwe, obtaining the  position of Sergeant. (Training was compulsory and was on a six weekly rotational basis. I relied on Terri to “keep the home fires burning”).

In 1978, we moved to South Africa and I became a Sales Manager. We emigrated to Australia in 1988 and I worked as a Sales Rep in heavy earth moving equipment. Retired to Tassie in 2011.

During your travels around Zimbabwe, did you meet any interesting people? I was talking to an old chap on the side of the road one day when a fly flew into my mouth. The old chap looked at me, shook his head and said “you don’t want to be doing that mate”.  I said “what’s that?”. He said “eatin’ all me bleedin’ flies”.

Why City Park Radio? Love to listen to the station.  Started reading The Examiner on air, before being mentored by Noel Heather in Archiving. I am now the Archiving Coordinator.

Is there anything else you would like to still do? Travel. Learn as much as I can, especially in City Park Radio.

(Linda Callister) What an interesting life both Tony and Terri have had. The stories they have told me are truly amazing. I would love to see their stories in a book – maybe one day. 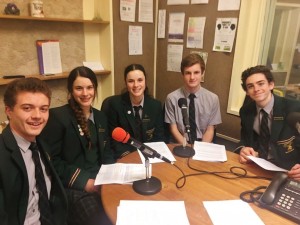 Recently some of the leadership group from Year 10 at Prospect High told us about their highlights at school, and upcoming events including a trivia night, and of course, a Bunnings BBQ at Kings Meadows.

If you know of any school that would like to participate in Schools Out, please get a teacher to contact the coordinator Adam Child … you can find Adam at Riverside High School.

A Great meal and music served up by The Tassie Tenor.

Raffles and prizes on the night – $45 pp

Get your tickets now at the CPR office—when the tix are gone there are no tables left.

Remember it is winter – you wont want to be left out in the cold. So get in early.

Just submit a photo of bright, lively, or fresh image reflecting any or all the values of community broadcasting: access, diversity, independence,     localism, multiculturalism, inclusion and social justice.

This photo was one of last year’s winners. The photographer won $500, and we were voted the best photo and won $500 too.

The hunt is on for any stories, trophies, awards, to be part of the CPR History project.

In particular, the committee is on the hunt for copies of minutes back to the early days. 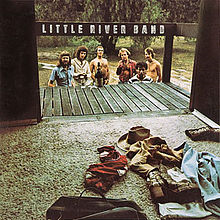 Little River Band was an Australian super group with Beeb Birtles, Graeham Goble, Derek Pellicci and Glenn Shorrock former members of prominent local bands, Zoot, Mississippi, Axiom and The Twilights. Over the course of 1974 various discussions were held and an agreement was reached to meet in Melbourne in early 1975. Later that year, along with Ric Formosa and Roger McLachlan they released their first album called “Little River Band”

The album opens with an eight and a half minute opus from Graeham Goble called “It’s A Long Way There” in which the trademark LRB harmonies first made their appearance. It was released in the USA as an edited single as well as “I’ll Always Call Your Name”

Other notable songs on the album include “Curiosity (Killed The Cat)” which had a slight reggae feel about it and “Emma” both of which were released as singles in Australia. One of the Glenn Shorrock contributions “Statue Of Liberty” had been already done when he was with the group Esperanto in the early 70s. It was reworked giving it the LRB treatment. The album is a mixture of rock, pop and country rock. It’s fine debut album from a group that was to receive international success in years to come.

Test transmissions on 96.5FM should start sune in June 2017

not many sleeps to go now.

All the fundraising, successful grant applications and great donations finally come to play.

It may be the start of winter but we guarantee our sausages will be hot! hot! hot! … especially with mustard sauce.