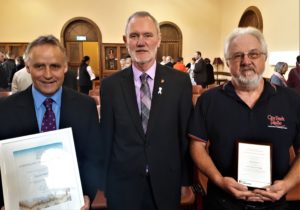 During National Volunteer Week, the City Of Launceston recognised the value of volunteers with their 2019 awards. Two volunteers were especially acknowledged for the time they give to City Park Radio.

David Mohr receives a special volunteer award for his contribution to the City of Launceston for showcasing our local sporting culture. Since 2013, David has produced, presented and coordinated all his volunteer co-commentators. His only reward – the love of it. Nothing will stop him from broadcasting footy in the afternoon and basketball in the evening. An entirely voluntary effort from David.

Chris Sayer receives an outstanding volunteer award. From the first meeting in 1978, Chris has been a contributor to City Park Radio whether it be programming, management, fundraising or administration. Recently retired from paid work, Chris has increased his volunteering and is now involved with sporting broadcasts and revived the HOT SEAT program. In between, he has been heavily involved backstage in Launceston theatre productions. Chris is in his 41st year of volunteering for the Launceston community via City Park Radio.Membership renewal 2017 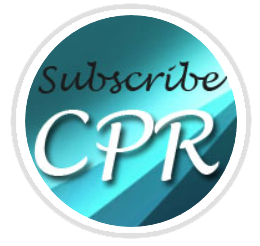 It’s time … yes … time to show your support for City Park Radio and renew your membership.

Being a member shows your support for the other members who volunteer to keep your community station alive. It also enables you to be a volunteer, undertake training and be a presenter if you can qualify.

It also gives you the opportunity to nominate and serve on the management committee and also vote at general meetings of the organisation. It is still only $45 per year to be a member.

A membership renewal form is included with the newsletter, and you have the option to pay by online banking. The details are on the form.

With the assistance of Andy & Malcolm from Bent Ear Records, Jenna has produced ‘Mother Dear Mother’ in the studios of City Park Radio.

It is a radio play with songs by Jenna Carole. Two actresses, Barb Boulter and Jenna Carole, play with the inevitability of the roles of women.

Be prepared for the challenges of being a mother in this production.

This special feature airs on Monday June 10 at  4pm. 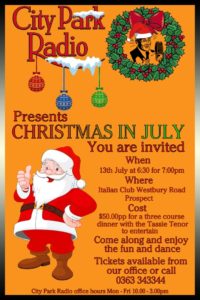 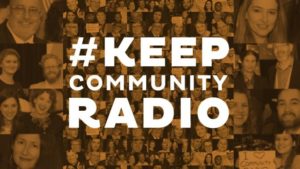 In the first of its kind, the CBAA State of the Sector report brings together a range of data sources to provide insights into Australia’s largest independent media sector, a key pillar in local broadcasting and internationally recognised example of grassroots media – community broadcasting.

Alongside this, radio’s place alongside other audio listening formats holds strong, with 62.3% of all audio listening being live Australian radio (the remainder is a mix of music streaming, owned music, podcasts, online music videos, other audio, audiobooks, TV music channels and other radio.

Read the full report on the CBAA website  https://bit.ly/2HsEWPP

A reminder to all members – there is a special meeting to consider changes to our constitution. These changes have been recommended by ACMA for our broadcast licence renewal and need to be ratified by our members before the end of June.  So see you on Saturday June 1st at 10am – Albert Hall Atrium (access next to Victorias).

GUESS WHO HAS BEEN IN OUR STUDIOS 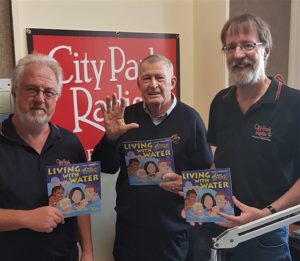 Chris & Tony learn how to do the five.