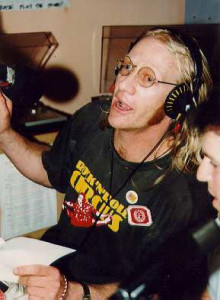 Tim holds the World Record for

“The Longest Single Continuous Broadcast By One Announcer”

Since Bruce Carty set his record back in 1993 there had been approx 22 Australian and 9 Overseas attempts to better it, all these attempts failed for one reason or another, until now, City Park Radio’s Tim Moon finally did it!

Tim had fabulous support from all volunteers at City Park Radio – they were there to chat with him and keep him fed… and most of all, made sure he didn’t forget the rules…and more importantly, reminded him not to sleep too long

For the benefit of any other presenters on a Community Radio station considering an attempt to beat this record, the basic rules are as follows.

For any presenter still masochistic enough to consider an attempt after reading this,
you can email us for the complete details….