RADIO MUSEUM – A MUST SEE 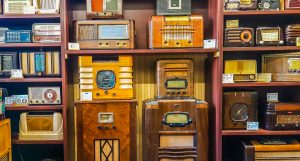 Have you seen City Park Radio’s very own Radio Museum lately? If not, you should.

There is an amazing collection of nearly 80 pieces on display. The earliest examples are from around 1920, including an incredible Edison model C-250 that dates from 1916. This fascinating phonogram played the latest in recording technology – a flat phonographic shellac disc. Only the very wealthy could’ve afforded one of these. There are several other old record players as well as radios of every type, size and description. There are radios that received short wave, medium wave and long wave, and even amateur broadcasts. It really is a lesson in the history of the Golden Age of Radio.

Our volunteer museum curators do such a great job in looking after the exhibits and welcoming visitors from all over the world – the visitors book has pages of comments from Europeans, Chinese, Japanese, Russians, Brazilians, South Africans – people from every corner of the earth. Young people are amazed at the antiquated nature of the pieces, some even term them as “retro”. Conversely, elderly folk warmly remember listening to these radios in their youth, as it would’ve been the only form of entertainment in the home. “Oh I used to have one of those” is a common response.

The museum always welcomes donations, so if you have found an interesting old radio in your garage, or your parent’s garage, get in touch with the CPR Radio Museum. You will find it in the City Park cottage near the park entrance in Tamar Street, and opening hours are 10am til 2pm, Monday to Friday.

MESSAGE FROM THE MANAGEMENT COMMITTEE –

The Committee would like to remind you of our Annual General Meeting on 25th August, 2018. Members are encouraged to consider contributing to the running of our station and nominate for the new Committee. Notices will go out in July and nominations must be received a week prior to the AGM.

CPR ON THE BALL 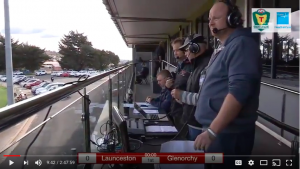 This is a photo taken from a television broadcast that was streamed on the Tasmanian Football League (TSL) website and also uploaded to Youtube. The picture shows statistician Dave Gruber and commentators Dave Mohr, Barry Triffit and Alex Gibbons describing the recent game between Launceston and Glenorchy played at Windsor Park in Launceston.

Not in the picture are boundary riders Craig Boon and Chris Sayer – that’s because they are as close to the action as possible, watching from ground level and listening in to each quarter-time address by both coaches. They also interview the winning coach from the dressing rooms after the game.

The many listeners that these broadcasts attract have applauded the detail and quality of our sports programs. There’s lots of emotion and excitement, none more so than this particular game when Launceston won in the final minute by a solitary point.

There are many impressive aspects to these outside broadcasts. The technology that gets the presentation to air is state-of-the-art, and the commitment by the volunteer commentators is admirable.

Dave Mohr is the lynchpin to all of our sports programs. No matter what type of sport it is, Dave assembles a different team each week and meticulously plans each show. Mr Mohr, we salute you …

STRIKE UP THE BAND! 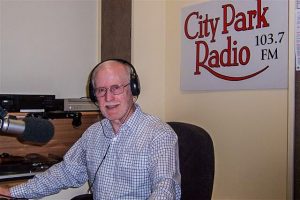 When I was a kid growing up in Western Australia I remember being taken into the city to watch the circus coming to town. The parade of circus wagons, clowns, performers, and animals was exciting enough, but adding to the excitement and festivity of the occasion, were the circus marches being played  by a group of musicians perched precariously on a flatbed truck – the “bandwagon” – which led the parade.

Since that time I have loved marching music with its bright melodies and thundering percussion. Its use by the armed forces was intended to rouse and inspire the troops. Who can keep still when a march is being played? It gets the heart pounding and the soul stirring, and generally makes you feel good.

My program On the Bandwagon features a lot of marches, but it also contains a great deal of music from many other genres, including classical, jazz, big band and popular music. Military bands, brass bands, concert bands and pipe bands are all featured, playing orchestrations and arrangements that you won’t hear in any other program. 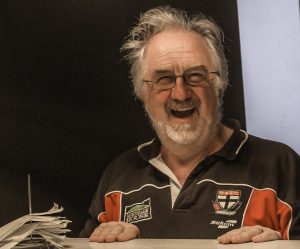 Chris has been involved with City Park Radio since before City Park Radio. It was way back in 1978 when Chris remembers attending his first meeting of an interest group set up to establish Launceston’s first community radio station. Since then there’s been more meetings, which may be the more mundane aspect of the adventure, but test transmissions, licence applications, licence success and actual broadcasting have been the exciting parts.

On the new station, Chris started out in a small team playing music from the 1960s. They then included the 1970s as well, and then adopted the program name “Reeling in the Years”. The program is still on-air over 30 years later (Saturday nights at 5 o’clock).

He’s occupied virtually every position at the station except Treasurer (not good with numbers), and has had several proud moments as the station has developed – New Brew, Radio Nowhere, School’s Out, Hot Seat – all still have an on-air presence. Other programs have gone into recess, such as our very own weekly arts show “A Kick in the Arts”.

Recently retired after 40 years at the poppy factory at Westbury, Chris and wife Anne plan to see the world while still able to sit on a plane for a day to get there. Even after seeing Turkey, Morocco, Europe, Samoa, Ireland, the U.S. and Canada, there are still lots more to see including Australia, by caravan. And there’s probably a few more radio programs still to come.

THE HOT SEAT: be listening at 11am Sundays for these programs –

and remember the program is repeated at 4pm the following Friday.